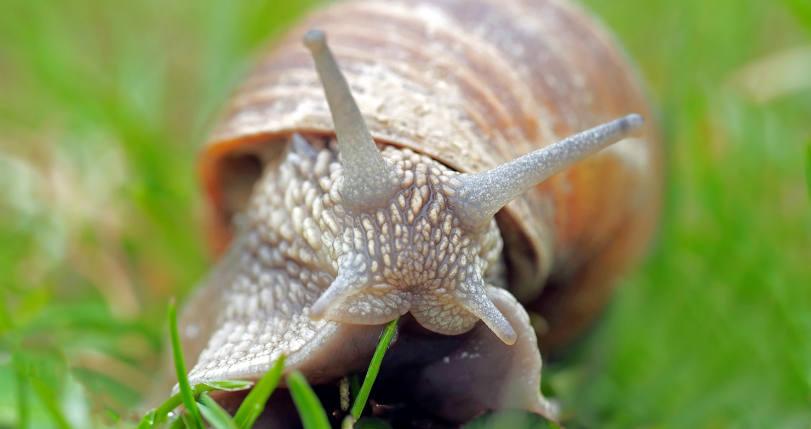 Many of us have heard the sickening crunch of a snail’s shell as we accidentally crush them whilst out walking or tidying the garden shed. If you have then you may have wondered if it spells the end for your unlucky garden friend or if they are able to mend their broken shells.

Sadly more often than not the outcome is not good. Snails can usually only repair minor damage to their shells, the comforting tale that snails can ‘move’ to a spare empty shell is just a myth.

Much like our own fingernails, a snail’s shell forms part of its body. Snails are born with their shells in place but at first, the shell is soft and unformed. This soft early shell soon hardens and grows with the snail throughout its adult life.

As the snail grows it produces further soft shell material that hardens to further grow its defensive armour. The snail excretes the new shell material around the opening of its shell causing it to grow in a spiral, widening with the snail’s increasing body mass.

If this shell becomes significantly broken then the snail will probably die. Whilst snails can repair small cracks and holes in their shells, if the break is serious then they will struggle to survive as the shell not only provides protection but also prevents them from drying out.

In captivity, people have been known to use plasters and even normal sticking tape to hold minor broken shells together allowing the snail to fill and seal the cracks in their shells.

In one extreme case a vet in Israel carried out extensive repairs to a stricken snail gluing it’s shell together.

Other animal welfare articles:
Stop Hedgehogs drowning in your garden pond.
Help is at hand for toads stuck in drains.

40 thoughts on “Can Snails Repair Their Broken Shells?”